First off, I'm afraid of heights.  Second off, the first mile of the Beast was uphill.  We left the starting gate, turned a corner, and I saw the biggest hill ever (or at least up until that point!). We walked uphill for over an hour.  At points I was crawling up the hill.  There were snowy hills, rocky hills.  Eugene saved us from a big loose rock.  It was a mess!  Eventually we got to the vertical cargo net, a straight up and straight down climb.  Having had a nervous breakdown on the tower at the Sprint and also having triumph on the A frame cargo net at Dirty Girl, I decided to Spartan the fuck up and go over it.

Here's a photo of a net, not the one from Saturday though. 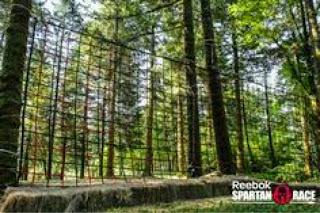 I started up and had to stop because my legs were shaking from the march I had just done.  I got down, breathed, and tried again.  I got up a few rungs (arms and legs still shaking) and accidently looked ahead.  Because we had marched so high up the mountain, I could see a wide expanse of the surrounding area.  If I wasn't terrified, it might have been quite lovely.  Add to this the thunderous feet of Spartans all around me shaking this flimsy ass piece of fabric and you've got the makings of a meltdown.  I saw my life flash by.  Hell, I saw yours flash by.  At this point, I heard a man's voice and was certain that I was dead.
This lovely man who looked like Jesus told me how to move my arms and legs to get to the top of the net.  He said his name was TK, and the blue of his shirt combined with the blue of the sky convinced me that I was all the way dead!  Once I reached the top, he invited me to take in the view.  I said, "I don't mean no harm sir, but I can't."  He asked me my name at some point and continued to help me figure out where to put my body so that I didn't go hurtling onto the hay bales below.

By this point, there was a nice crowd of people cheering me on.  I felt like I would really wreck their day by dashing my brains out on the hay.  I made it a point not to die!  Whatever works, right?

Once I was safely planted on the ground, I gave him a big hug for saving my life.  He said he loved my shirt and wanted to take a picture of it.  The look on my face is pure elation at being back on earth. 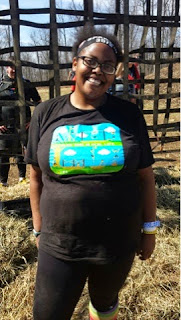 As we were asking to the bus at the end of the night, I heard someone yell my name.  It was TK. He said he was proud of me and wanted to take another pic with me. 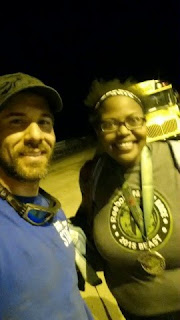 I look absolutely delirious and exhausted because I was.  I didn't get over my fear of heights.  In fact, my next Beast tale will be about another panicked moment.  Heights stink!!!  However, I faced my fear and trusted this man.