A Weekend of Fun: Pole Fitness and Bikram Yoga

I am tentatively scheduled to do the NJ Spartan Beast in April, so in the meantime, I've been looking for workouts that will help me increase my upper body strength.  I have to get up those ropes and over those walls!!  Over the course of the week, I do push ups and planks, and I still have one more week before my weightlifting restrictions expire.  I decided that to jump start my quest for more muscles I'd add two workouts to my repertoire.

Pole Fitness aka "Coming To The Stage!  Cinnamon Rolls!!"


While researching Capoeira classes, I found out that there is a pole fitness class in Portland.  I love dancing and had taken a few classes in Los Angeles (I actually was in class with the girlfriend of a grad school friend.  awkward!), so I signed up for the 5:30 Saturday night Foundations 101 class and drove off to Portland super excited!

There were 3 of us in the class, and lucky me, I got to be in the front row!  Our teacher Jonessa is really nice.  We started off with a really intense stretching warm-up.  Lord, those lunges!!  She told us how important it is that our shoulders and arms are warmed up.

For the first part of the class, we worked on ab exercises.  Jonessa had us sit on the floor and lift our legs while holding the pole.  Then we stood up, wrapped our leg around the pole, and did oblique crunches by reaching towards the floor and then using our muscles to pull ourselves up.  I'm pretty sure by this point I was wondering what I'd gotten myself into.  However, I'm always up for a challenge, so I powered on.

In the second part of class, Jonessa taught us a few different moves.  They required a lot of muscle control and good posture.  She taught us how to walk around the pole (we pointed our front foot and dragged our back foot).  We learned how to switch directions while walking around the pole.  This was good because it's easy to get dizzy.  We did dips, peekaboos and body rolls.  She even showed us some cute ways to get up off the floor.
At the end of class, she said we could practice all the things we had learned.  She put a little routine together and I had fun working on it. 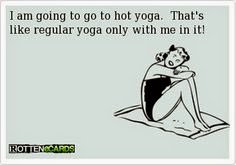 I had a great idea to go to Bikram yoga and when I told my pal Alex she said she'd go.  Initially I was worried about the heat.  I hate heat and summer.  I was also concerned about my glasses fogging up and me being unable to see the instructor.  Basically, I thought this would be a hot mess, but I'm down for a challenge, especially if I think I'll get a funny story out of it.

When I got to the studio, I signed the waiver form, changed out of my clothes, and quickly found a spot in the room.  When I tell you that I can't begin to describe what the room smelled like.  My good friend Roz's warning that it would smell like a Diaper Genie and a barrel of monkeys was right.  After a short while, I got used to it and the heat didn't feel so bad.  I think the key for me was bringing a bottle of frozen water so that I had some nice cool refreshment during class.  We started some breathing exercises and standing poses.  At some point, I sat down because I needed to chill out.  Bridget, the instructor, shouted me out a few times and came over once to tell me that I could get on my hands and knees for one pose.  I told her that I could definitely do that!

After we stood, we moved down to the floor and this was a much easier set of poses.  We got to keep going into savasana, and that was alright with me.  The funniest part of the floor poses was when we had to lie on our stomachs, and the Bridget said that our chins would be on the floor.  Girl, she must have been talking to the next one, because my chi chis were not letting my chin get nowhere near nobody's floor.  We did this really funny breathing exercise at the end, and class was over.  She told everybody that it was my first class. That was unexpected, but Alex said that they do that to everybody.  Whatever.  It made me feel like Drake.  I stayed on the floor for a little bit, made the mistake of standing up too fast, and basically had to flee the room for cooler pastures and more ice water.
In the hallway and changing room, while trying to come back to life, people came up to me to give me encouragement and to testify about their experiences in class.  I'm assuming that none of them registered the look of sheer heat exhaustion on my face or the fact that they were not wearing any clothes.  For example, the woman who had been next to me told me that she cried at her first class.  Then I met a UNH colleague from Sociology.  Another woman who turned out to be a new instructor said that she liked that I was smiling in class.  She told me her teaching schedule, and I made a mental note to go on Tuesday night.
After class, Alex and I chatted and I showed her my penguin underwear.  (I had a good reason to.  I promise.) She shared some coconut water with me (She said it tastes better when it's very cold), and we went off to take on the rest of Sunday Funday.

I liked having a weekend of dancing and fun with muscles, so I'm going to repeat these classes next weekend.  My goal is to get to the intermediate pole dance fitness class because I want to slide down the pole.  I'll be sure to record my awesomeness.  I have a pass for 10 days of as much yoga as I want, so I've set a goal to go every day this week.  I'm not sure about Saturday though since I already have Dance Fusion and 207 Pole Fitness scheduled.

My arms are really tired, and I just realized that I have barre class and a swim session tomorrow.  Nice!  I can feel myself climbing that rope and avoiding those burpees now.
Posted by Unknown at 8:35 PM