I've been doing planks pretty consistently for a couple of years, and I wanted to share some pictures of me doing them.  In this first collage, the top pictures were taken in December 2013.  The bottom ones were taken this morning. 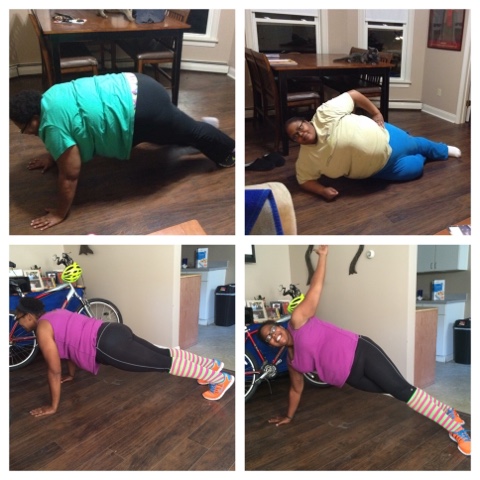 When I first started side planks, I joked that an ant parade could pass under me.  Then it was ants on skateboards.  tee hee  (Shouts out to Alex for making me do so many planks over the years!  I love her!)

I adore this set of pictures because it shows plank outtakes that I posted on Facebook.  I believe in showing everything because it's all part of the process (and because I'm a ham!)

When I first started recording my planks, I held them for a shorter time, so much of the time was spent telling my husband Brian to take the dang picture already.  I got tuckered out pretty quickly, so he made sure to get snaps of me resting.  I would also have cats interrupting the photo shoot.  I have no idea why my leg is kicked up in this first picture, but I think it's hilarious!  Get into all the cute colors I wore too! 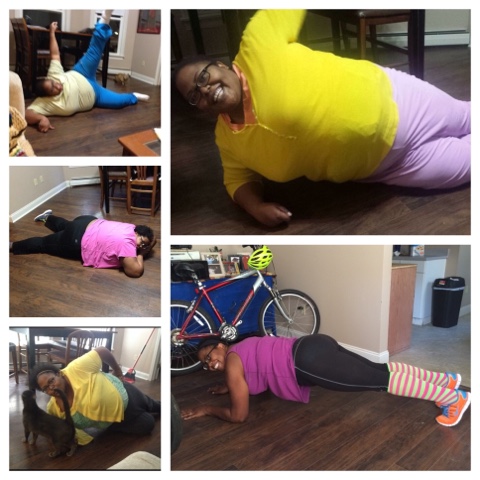 I also like these pictures because they show me having fun when doing planks on my knees. My movement motto is "Make it look good!"  Knee planks are cute!

Now I can do a one armed plank!  Brian told me to put my butt down, but I told him that my butt was down.  haha  The great thing about planks is that they can always be worked on. 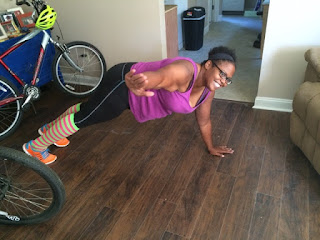 ok, I'm out.  Hope you enjoyed seeing some pictures of me doing one of my favorite exercises!

Speaking of exercises, I'll be starting a new video series next month, "One Song Workout Class," so be on the lookout.

Also, if you're digging what you see here, catch me on social media.