Today I had planned on talking about strategies for maintaining fitness habits for academics.  The new school year is starting, and I think it's important to think about how we'll remain healthy this semester.  However, something happened this morning that prompted a change.

This morning I made my triumphant return to Zumba with my very favorite instructor, Alex.  I have been taking most of her other classes, but Spartan training, triathlon non-training (tee hee), and working on my own fitness projects have kept me from Thursday morning Zumba.  My physical therapists have pretty much told me to hang up my OCR and triathlon sneakers until next season, so that means that I'll get to do lots more dancing.  More on that some other time.

After class I was getting my stuff, and a fellow student said that she hadn't seen me in a while and that I had lost weight.  She said that I looked great and asked me how I did it.  Before I could respond, she grabbed the fat on her stomach and said, "I really need to work on this."  I told her that she doesn't have to do anything except be nice to herself.  "Be nice to yourself."  Then Alex came by, and I told her that I feel like I'm always saying this or some variation.  Then we had a joke about her sweet dog Bella not putting up with being talked to any kind of way.  Basically we should all take a lesson from Princess Bella.

I came home, got dressed for tonight's hip hop cardio class, and while dancing around had an idea to publicly celebrate the body part that this woman criticized on herself and praised on me.

Here's the song that inspired the shirt, "Lose Control."  Can we have a moment to bask in the Black girl brilliance that is Missy?!

ok, that was nice.  Now I get that at 265 pounds (again I don't weigh myself often, but I'm stating it here to make a point) I am at some people's starting weight.  Girl, I get it.  My thing is that I don't have to wait until I'm at a particular weight to feel not just good but PROUD of my body.  Every day that I choose freedom and kindness is one more day that I get to live like this.

So to that very nice woman after Zumba class, here's my belly that I don't have to do anything about.
Behold my chubby waist in all its glory!

I often say that all bodies are good bodies and that there is NO wrong way to have a belly.  I really hope that woman believed me what I said that being kind to myself is how I "did it."  I am exactly the way I am supposed to be in this moment, and so are you! 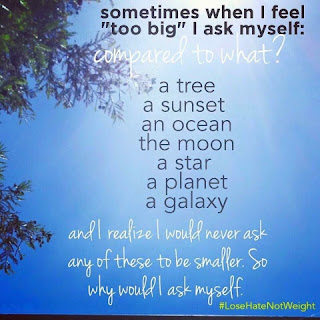 Thought For Today:  Could I try being kind to myself?