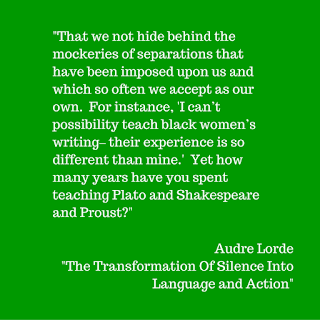 One of the games that I love to play with my husband is watching movie trailers and wondering how much time will elapse before we see a film that doesn't feature a white male protagonist.  Try it sometimes!

What you'll discover is that white guys do it all!!  They go into outer space.  They rob banks and apprehend bank robbers.  They repair strained relationships with their families.  They travel through time.  They solve mysteries.  They climb Everest and train animals and cure diseases. They are zombies and soldiers and CEOs and presidents. All the while we (those of us who are not white guys) are told that these films are about universals truths:  love, honor, fear, family, life, stuff like that.  The movie theater is a classroom where we learn that white men can show up anywhere and speak about anything with authority.  What's more, we can always connect with those struggles and learn something valuable from them.

You know what?  If white guys are the universals, guess what that makes the rest of us?  On a good day, we're "minorities," delegated to a special section of the bookstore, the magazine, the tv channel line-up.  On a bad day, we're "divisive," "a special interest group," or "limited."

Black Feminist Fitness Saved My Life!
Someone asked me yesterday if I have always had the kind of confidence that I exhibit now, and I told her that this confidence comes from years of studying Black feminism.  Not only do I get models for thinking and writing, but I also learn that Black women's voices and Black women's experiences are not ancillary.  We are crucial.  We are important.  We are brilliant.  Who am I to not be confident coming from all that Black girl excellence?

When that shift happened for me, when I learned that the fitness magazines, the fitspo memes, the posters at my gym, the discourse around everything from kale to waist trainers to McDonald's, are ALL put out there to be universals, but are really just specific worldviews put out as universals, my world changed!

When I actively sought out those voices which have been pushed to the margins of fitness discussions (adaptive athletes, older exercisers, plus size participants, incarcerated athletes, queer and gender nonconforming athletes, new exercisers, non-exercisers), my world changed!

When I applied what I'd learned from over 20 years of this work, "Wrong Is Not My Name" was created.

How My Black Feminist Fitness Works
I am unapologetically fat and Black and female!  That makes it rough sometimes here in New Hampshire, but I share those stories because I know I'm not the only one.  Because I'm so often talked at rather than talked to, I make it a point to listen actively and create motivational posters and workout playlists so that we can feel stronger, happier, and more tuned into our brilliance.  I speak out against the body shamers because I know a little something about how us outsiders get dismissed.

I do this work knowing full well that a fat Black woman suggesting that loving yourself more, changing your media consumption, doing movements that bring you joy if you want to, following the money because corporations profit off our feeling like shit, and doing something nice for someone else will NEVER EVER be as rich and as well-respected as people who sell pornographic fitness magazine covers, tell us that our busy work schedules, childcare and eldercare responsibilities, and food desserts are just excuses, and an industry designed to sell us fat folks pills and potions.  *in my Nikki Minaj voice*  I tell you that you are wonderfully perfect just the way you are.

These are the so-called universals of diet culture, and they are steeped in white supremacy and misogyny.  Like with film trailers, these messages can show up anywhere and speak with authority about anything, and even when we know that they're not talking to us, we're supposed to connect and learn something valuable.

Thought For Today:  When was the last time I heard a fat Black woman being held up as a fitness resource?  When I do see fat Black women in the media, how often are they talking about fitness or wellness?